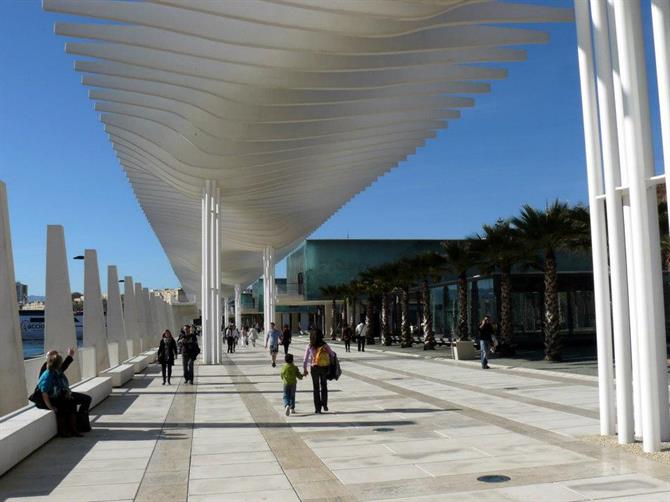 Though cash has been short during the recession, as series of important infrastructural and beautification projects realised in Marbella, Málaga and other parts of the Costa del Sol have made a valuable contribution to the quality of life and economic revival of this region.

Among them are completed projects, such as the San Pedro viaduct and the new terminal and runways of the Málaga international airport, as well as those currently under development. The latter includes the new Málaga metro and the multi-faceted park that is taking shape above San Pedro’s viaduct, but in addition a whole new series of projects is set to leave the drawing boards and become a reality.

The famous Paris museum with the iconic modern design penned by Renzo Piano and Richard Rogers is set to open a branch in the city that has become one of Europe’s most recent – and vibrant – centres of art and culture. The venue will be a ‘glass cube’ not unlike the minimalist prism designed to house the extension of the Louvre, and the addition of such a prestigious name will add further shine to what is becoming an increasingly sophisticated regional capital.

The resounding success of the Calle Larios and surrounding areas, which has been car-free for some time now, has seen the creation of a vibrant town centre popular with locals and visitors alike. The plan is now to extend this area to the imposing cathedral district, which borders the Picasso Museum, and further enhance the appeal of this beautiful historic quarter.

What is now a derelict site could soon become an attractive park at the heart of a new green zone right near the airport. Called the Benítez Park, it is just one of several green areas envisaged by local authorities. Others include an expansive semi-rural park area measuring 8 hectares in Torre de Benagalbón, on the outskirts of Rincón de la Victoria, while in Vélez-Málaga work has begun on a 2.6-hectare botanical garden representing the flora of the Axarquia.

Fuengirola is working on converting the Fuengirola River into an attractive leisure and recreation zone that will add large green spaces to the town. Not to be outdone, the pretty white village of Mijas Pueblo is about to launch a project aimed at the beautifications of squares and streets in the centre, while Benalmádena is similarly repaving, landscaping and renovating parts of the town in a manner reminiscent of Marbella, where the third phase of a downtown beautification process is to commence in September.

It seems fitting that the most ambitious of all these projects will take place in Estepona, the town that has done such a remarkable job in beautifying and revitalising its town centre. Here the plan is to create an elegant seaside boulevard by replacing some of the existing buildings with attractive modern shopping areas, leisure facilities like a cinema and a luxury city hotel right upon the beach and within walking distance of the historic centre. Whether motivated by the upcoming municipal elections or made possible by improving economic conditions, the latest round of improvements to the Costa del Sol will further enhance the appeal of an already enticing region.