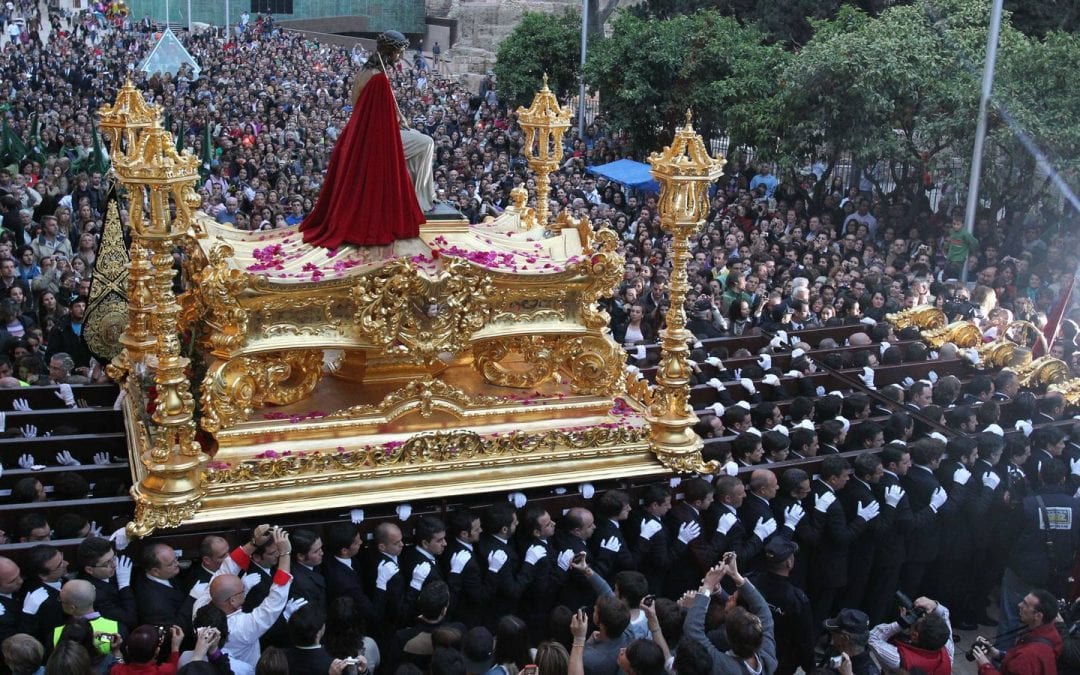 When it comes to festivals, there is no other country on the planet that has as many as Spain. It also has the most holidays per month, but who are we to complain? It’s all part of the lifestyle! Holy Week, known as Semana Santa, is the Spanish Easter. Although the holiday is celebrated throughout the entire Christian world, when it comes to the Passion of the Christ, no other place on earth does it so elaborately like Andalucia.

Malaga, and Seville have the most elaborate Easter celebrations in Spain. Each year tourists flock to Malaga to watch in awe as the processions go by, taking in the atmosphere, and the raw emotion. Even those with the hardest hearts, can be swept along by what is said to be an extremely moving experience. Holy Week is more important than Christmas here on the Costa del Sol, and just by looking at the images in this guide, you can understand why.

This guide will help answer your questions about Holy Week in the South of Spain. We explain the cultural importance, the Brotherhood, the clothing worn, and where you can see the processions in 2016. We provide updated information about Easter, so you and the entire family can get out there and take it all in.

Easter is the biggest religious celebration in Spain, and nowhere is that more relevant than in the South of Spain. Semana Santa starts on Palm Sunday, and ends the following week. For the residents of Malaga province this means public holidays on Maundy Thursday and Good Friday, unlike in the UK where the holidays fall on Good Friday and Easter Monday.

But, the question remains – why is Easter such a big deal in Spain?

Each year the dates of Semana Santa will vary, given that the Easter feast is not attached to any specific date, but is connected to a cosmic event or phenomenon. The Roman emperor Constantine started it all by calling the Council of Nicaea in 325 A.D. to the first Sunday after the full moon. This follows after the vernal equinox in the northern hemisphere – basically, Easter can never be celebrated before March 22nd or after April 25th.

Because Spain is over 75% Catholic, the Passion of the Christ is honoured during Semana Santa. Since the medieval ages, cities, towns and small villages across the whole of Spain come to life during Semana Santa – none however, like those in Malaga, Seville and Granada – Marbella also puts on an incredible show.

One particular Semana Santa celebration, in 1521, took place when the Marqués de Tarifa returned from a trip to the holy land. It was sometime after his trip where he institutionalized the Via Crucis (Stations of the Cross) in Spain. It was from that moment on, this holy event was celebrated with a procession. In the years that followed, the observance of the Via Crucis eventually broke up into the various scenes of the Passion, with the incorporation of portable crosses and altars. This would eventually lead to today’s elaborate processions in the South of Spain.

If you want to be utterly impressed, then understanding what exactly is happening during the processions or the Via Crucis, will give you a whole new perspective. You see, the processions are basically floats, but not the kind of floats you witness during parades. Instead, sometimes up to 200 men are carrying floats that can weigh up to 2 metric tons.

The floats contain statues of Christ, and each procession plays out the Passion of the Christ – or Stations of the Cross. These processions must be practised for the entire year leading up to Easter week here in Spain. Those 200 men cannot afford to make one simple miss-step in their sequence – if they do, it is very possible someone could die. Imagine for one moment dropping almost 2 metric tons – the end result wouldn’t be pretty.

This is exactly why the processions are so impressive, and garner worldwide attention. The floats are accompanied by members of the ‘Brotherhood’, who can be recognised by their distinctive garments and conical shaped headdresses.

The Brotherhoods (hermandad, corporacion, cofradia) are members of the parish who organise themselves to celebrate Semana Santa with processions. Every Brotherhood dedicates itself to a certain scene, for example – the burial of Christ, the taking of Christ’s body off the cross, the flogging of Christ by Roman soldiers, the judgement of Christ by Pilate, and so on.

The Brotherhood also perform specific functions during Semana Santa. For example, the Brotherhood of Death and Resurrection of the Lord will be the one to first announce resurrection on Saturday at midnight. Then there is the three grenadier Brotherhoods who are dedicated to the Virgin. They will take to the streets on the Friday of Pain – the day commemorating the Pain of the Mother.

Put together in one procession, they develop the whole story of the Passion before your very eyes, and it’s breath-taking.

Each year, Easter week in Málaga takes to the streets an atmosphere worth seeing. We can almost guarantee that all of your 5 senses will be effected. You can see processional thrones carrying images that sway all along the entire route, thousands of penitents lighting each giving colour with their candles and robes, processional marches, as well as aromas of incense and flowers filling the air as the processions pass by and thousands of people crowded to see and applaud their favourite tronos.

For events listing, you can visit Marbella Family Fun for Marbella, and Andalucia.com for Malaga’s.